Arrival on the 20th with Tessa and my Mom to Georgetown admissions at 6:30am.  We all piled into the Cancer Car and took HOV on the way down with no traffic.

I'm not sure if I've explained the cancer car concept or not.  Since Gtown is starved for space (think no real private rooms, car valet required unless you get there early so they can rotate cars around when the double park them), I've always wanted to take the smaller of our two cars to navigate the parking lots so I won't be upset if we end up with scratches etc.  The 2003 Honda CRV fit this bill perfectly.  I have since referred to it as the Cancer car.  I really like this idea because it will allow me to divest of this car when it is all said and done and I'll no longer have negative connotations associated with the car.  Good in theory, we'll see how this works. But I digress...

As soon as I'm checked in, assigned my hospital wristband (with a QR code) and my allergy wristband, I head to interventional radiology.  "Ground floor of the CCC" for my avid readers.

It could not have been more than 10 minutes when they call me back.  Strip down, nothing on but the gown, I was told.  I asked if I could put a second gown on and the Tech laughed and told me she did the laundry and didn't want the extra work.  I cracked a smile as I was being beaten at my own game.  Now the last TACE, I had a gown in front  back but didn't fight much because there is no modesty in this procedure and pretty much everyone sees you naked over the course of your stay.  Doctors, nurses, students in training everyone wants to check out (and feel) the incision site.  In case you haven't picked up on the location of your artery for this procedure is right in your groin.

Here is where I'm sure questions are going through your head.

1) Are you just laying there with your package pretty much exposed on the operating table?
2) Do they prep the site? (think bikini wax ladies)
3) Do they do something to prevent you from peeing during the procedure?
4) Are you awake?

The answers to all of these questions is of course yes.  Skip this next section if you're not in to humor or not in need of a good laugh.

The initial TACE I was not ready for any of the above.  I ended up with a condom catheter on and a Brazilian wax. But this time it would be different, I was prepared and armed knowing I was one step ahead of them...or so I thought.

Despite my best job at the self administered Brazilian, they again had to reduce even further.  Always awkward and I was hoping to have to avoid it (no such luck).  Let's just say I'm now ready to hit the beach once the incision site heals!

The condom catheter is just that with a twist, the whole interior of the condom is chock full or adhesive.  What luck!  I'll let you imagine (or not) what a show removing this is with adhesive remover once you're able to move around and use the bathroom on your own. 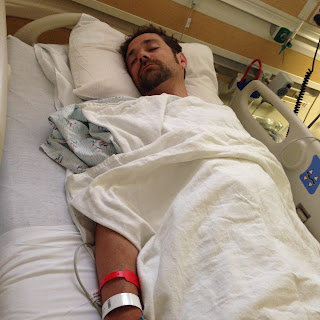 But....back to the procedure. As I drifted in an out like in a dream, they asked that I take breaths so that they can thread the artery with the catheder that will administer the chemo.  I was awake for this but it's really not that painful with the drugs they provide.  Before I knew it, the 2 hour procedure was over and I was being wheels to 7 West.  (The Penthouse of the hospital that they call the PACU). 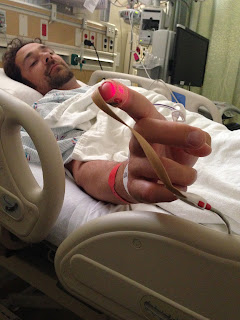 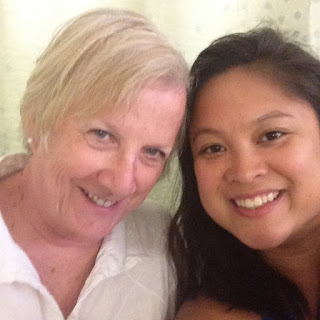 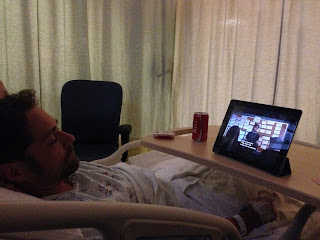 For those who read my previous posts know that I had a crappy (pun intended) deal with my shared room.  The PACU was divided up into isolated bays and the nurse to patient ratio was very high.  Also, as things wind down for the day, they move most patients into shared rooms but stayed in PACU, meaning that there were maybe only 4 people for 20 bays who would be staying overnight.  This was like staying at at a nice Marriott as opposed to the Motel 6.  Somebody was looking out for me and I want to thank that/those person/persons. 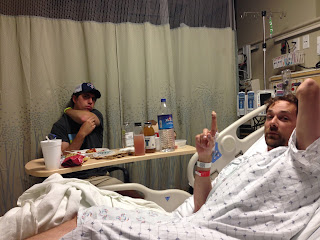 The biggest difference that I notice between this procedure and the last (and they're virtually identical) is that I've had greater stomach / abdomen pains with this go-round as opposed to last.  I'd like to think this is because this means the chemo is working more, but that's just my thought based on zero medical knowledge.  I've also had some slight nose-bleeds (very minor) as my platelet count is somewhat low (88k).  I'm not sure if that is related to my existing poor liver function or chemo related.

Two days later, I sit here typing hoping that soon, I'll be able to have my follow-up tests and that they'll show signs of the tumor shrinking.

Don't forget that my good friend in New York is raising funds for the Leukemia / Lymphoma society and honoring me by dedicating her marathon run to me (#WineglassForWhitey).